Do People with Sleep Apnea Have Panic Attacks?

Scientists studied the relationship between sleep apnea and anxiety. They discovered that anxiety and mood disorders, are psychiatric disturbances that are often found in patients with insomnia and sleep apnea.

It's no wonder that many people with obstructive apnea (OSA) have daytime anxiety or panic attacks and nightmares during the night.

Some CPAP users even have anxiety using their CPAP mask during sleep, pulling their mask off.

If you have sleep apnea and anxiety, you'll find in this article tips and exercises to treat your problem.

In this page you'll learn:

Types of Anxiety in People with Sleep Disorders

Many people ask themselves if there is any link between sleep apnea and anxiety, for example:

Anxiety is one of the most common mental problem associated with sleep disorders. It's not unusual that if you have anxiety disorder, you will also have sleep disturbances, like insomnia.

The most common anxiety disorders that can cause sleep disturbance are:

GAD manifests symptoms of anxiety that are driven by worry, which last for at least 5-6 month.

In this type of anxiety disorder, there are symptoms related to sleep apnea, such as fatigue, restlessness, irritability, poor concentration...but doesn't mean that you have a link between sleep apnea and anxiety.

The panic disorder manifests with somatic symptoms such as chest pain, heart palpitations, tachycardia, the impression that they are going to die.

A person with panic attacks is more likely to involve sleep apnea in his problems. The symptoms are almost the same:

Do you think you have sleep apnea AND anxiety? Are you worried about having nightmares and panic attacks?

Here are the symptoms of anxiety and panic attacks in patients with sleep apnea (from The Diagnostic and Statistical Manual of Mental Disorders (DSM-IV) :

Although more research is needed, scientists concluded that there are couple of causes which may cause anxiety in sleep apnea patients:

46 OSA patients were tested with magnetic resonance T2-relaxometry and their anxiety symptoms were evaluated using the Beck Anxiety Inventory (BAI).

The results are incredible: 16 OSA patients showed anxiety symptoms. Furthermore, these patients with anxiety also have brain injuries in the areas where the brain regulates emotions.

This also proves that if you don't treat sleep apnea, brain injuries will occur sooner or later.

So, do you get worried fairly often? As you probably guessed, this is the most common cause where patients with sleep apnea may develop anxiety.

Here are some examples where negative thoughts can cause fear, the precursor of anxiety in apnea patients with anxiety sensitivity:

For more info about pauses of breathing, see Stop Breathing While Sleeping.


Can you die from sleep apnea in your sleep? See the answer int the article about sleep apnea death.

Many sleep apnea patients have dreams during a breathing pause while sleeping. Examples of dream experiences are:

For more info about dreams in patients with sleep apnea, please read Principles and Practice of Sleep Medicine. 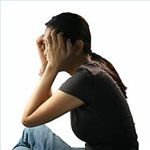 Having sleep apnea and anxiety can make the CPAP treatment more difficult for the patients.

Developing fear wearing the CPAP mask can determine the patient to avoid using the CPAP consistently. In this situation, sleep apnea will worsen in time, causing many complications.

For some people, even without the fear for wearing a CPAP mask, the treatment for sleep apnea can be difficult because of the risk of developing insomnia.

Anxiety or depression can contribute to insomnia, which you can say is a curse for a person with sleep apnea. Being very tired, but without the possibility to sleep, will make your body even weaker than before.

For more info related to insomnia in people with sleep apnea, see the question about sleep apnea and insomnia.


Furthermore, the panic attacks or nightmares from your sleep when you stop breathing can affect the mood of the following day, as Michael Schredl mentions in his researches.

The recurrent anxiety attacks can lead to anticipatory anxiety (fear of having another panic attack). And, according to Reiss' expectancy theory, this fear of anxiety can be a risk factor for panic disorder.

In other words, having anxiety will affect negatively your treatment for sleep apnea, causing insomnia symptoms and other anxiety feelings in the future. Breaking this cycle is possible by having a good night sleep - sleeping without having apnea episodes.

This means using the CPAP all night, without throwing the mask away during sleep, or without having leaks. With a good sleep, a patient with sleep apnea can eliminate his anxiety symptoms.

How can I get sleep if I have sleep apnea and anxiety?

CPAP treatment is the most effective way for healthy sleep in apnea patients, but it's also a tough choice for a patient who also have anxiety.

This study also demonstrates that compliance to CPAP treatment can treat depression, sleep apnea and anxiety together.

The fear of using the CPAP mask, or having claustrophobic symptoms with the mask, can make the treatment difficult.

If you can, start using nasal pillows which are less intrusive than nasal masks or full face masks. The ResMed Swift FX nasal pillow is very simple, with only one strap across the cheek. This mask should be the first to try.

However, if you need to wear a full face mask and have claustrophobia, you can get accustomed with the mask by wearing it while playing a game in front of your computer or watching TV. Then you can wear it while sitting up reading. Finally, try to wear the mask when you read in bed.

Tips for CPAP Users With Sleep Apnea and Anxiety

Note: Some CPAP users with anxiety turn their ramp feature off, because they feel they can't get enough oxygen in and then start to panic.

If you find impossible to use the CPAP machine﻿, then I recommend other treatments for sleep apnea that could help you with anxiety, such as:

Bottom line...if you have sleep apnea and you don't even know you have it, it's possible to develop in time panic attacks or anxiety during sleep.

That's why is so important to evaluate your symptoms in a sleep lab, with polysomnography (PSG). So do not neglect the advice to take the sleep study, if you wonder you have sleep apnea and anxiety in the same time.

If you are really interested in anxiety and techniques to stop panic attacks, you can learn more from here.

Here's some of my more popular pages: