What Are the Most Common Sleep Apnea Symptoms?

This page will help you discover if you have the symptoms of sleep apnea. Please read carefully this page, as it may save your life.

If you want to find what happens when you ignore these symptoms for a long period of time, please read the article about the side effects of sleep apnea.

Some people have sleep apnea symptoms for many years without noticing. However, at some point, their life starts to be in danger due to ignorance and untreated sleep apnea.

Often, it's too late to improve their quality of life.

Most people with sleep apnea symptoms fall asleep at work, at movies, while driving...almost everywhere!

Do you feel very tired during the day? Do you snore during the night?

Then the information from this page may open your eyes.

This video explains the clinical presentation of sleep apnea:

If you want to learn what happens when you ignore the sleep apnea symptoms, please read the article about the side effects of sleep apnea.

Obviously, the night symptoms are difficult to be observed by you.

However, your spouse can see that something is wrong with you, and he or she can trigger the signal. 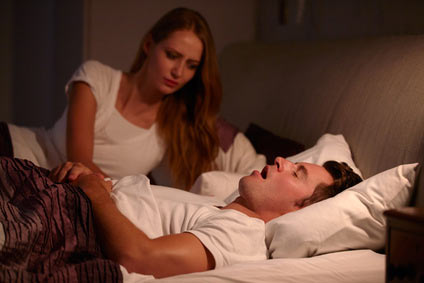 Loud and irregular snoring is the most obvious symptom of sleep apnea. Sometimes your noisy snoring stops when you hold your breath for a few seconds, then the snore begins again with a snort or a gasp.

Your snoring can be so loud that you could wake up from sleep, or even to be heard by the neighbors.

This unrhythmic snore with choking and gasping for air, is a scary and unforgettable scene for your bed partner. He or she will think that you can die in sleep.

For more information about snoring and sleep apnea click here.

Do you believe that snoring is the biggest problem? Hmm...ask your bed partner.A person with sleep apnea frequently stops breathing while sleeping.

Your bed partner should know more about your body fighting for every breath of fresh air. He may report a witnessed apnea that is often followed by loud snorts or gasps at the end of apneic episodes.

This can be extremely concerning to the partner and serve as the trigger to seek medical attention.

Occasionally, during the arousal that terminates the apneic event, the bed partner may witness arm flailing, other gross movements, or strange behavior.

Remember, the above symptoms of sleep apnea happen during the night, when you are asleep!

Keep Your Bed Partner Close To You!

A detailed history from bed partners is imperative in all cases of suspected or undiagnosed sleep apnea.

During the day you may have another sleep apnea problems. Some of the symptoms will seem banal but you should pay attention to them.

The most encountered problems in patients with sleep apnea are excessive sleepiness and extreme fatigue.

These symptoms are not temporary, but they happens daily. And they can get worse day after day.

Morning headaches are observed in sleep apnea, but also in other disorders. You need to know the difference between a simple headache and headache caused by sleep apnea.

Click here to learn more about the sleep apnea headaches.

Your ability to concentrate, your mood, your work capability will be affected.

Your personality changes and you are likely to suffer from clinical depression.

Comments from People with Symptoms of Sleep Apnea

- My hubby still falls asleep anywhere he sits down for any longer than 10 minutes, he has no energy, is always tired, and even though he's being treated for low testosterone (and his levels have risen by over double) - he still has absolutely NO sex drive.

- My husband was diagnosed with sleep apnea a little over 2 and a half months ago. He has severe sleep apnea and has anxiety and I believe some depression as well. He is in therapy and saw his sleep doctor this past Wednesday.

His sleep has gone from a little over 2 hours a night to a little over 4 hours. This past week has been awful. He is happy one minute and crying the next. He acts "lost" or "loopy" almost like he is drunk. But he isn't drinking.

- My wife's snoring has gotten progressively worse...and I witnessed several times when she would quit breathing, then jerk, snort and gasp before beginning to breath again. I urged her to get tested, which she did.

I accompanied her on the trip to get the results.The doc's PA told us she has SERIOUS sleep apnea, clocking 55 non-breath episodes, some as long as 10 seconds, in an hour's time.

- My boyfriend was diagnosed this month with SEVERE sleep apnea. I know that stopping breathing for 10 seconds or more, 30 times an hour is diagnosed as severe.

He stopped breathing 212 (yes, two hundred and twelve) 10 second+ periods over two hours, so that is an average of 106 times an hour. So I think it's safe to say it is very, very severe.

- The other night some actor on a TV show was talking about being tested for sleep apnea and mimicked the sound he makes at night - the gasping. I didn't think much of it, that's gosh this is boring.

Then tonight I am laying in bed and my husband is snoring loudly and doing the loud gasp. I am not sleeping thinking how much I hate it and how it so often keeps me up and then it hits me. That is the same noise!

So I searched on internet about sleep apnea. So many symptoms has my husband, things that we have been unable to figure out. Usually you read a list when you think you have something and a few are true. Not in this case almost every strange thing can be caused by SA.

A person who hasn't found he has sleep apnea doesn't realize the seriousness of the situation.

He thinks he is normal, and other people may be just different. Or, he will blame on other diseases for his sleep disorder.

However, waiting for sleep apnea to treat by itself is a bad idea,
because sleep apnea complications may occur.

For example, maybe you blame your weight problem, your hypothyroidism, your heart disorder or your medications for taking naps during the day.

But these are only symptoms of a cause. And the cause is very likely to be sleep apnea.

Did you notice from the upper descriptions that you have sleep apnea symptoms?

If it's true, don't be scared! You already made the first step to a healthier and more vigorous life, learning from this site.

Now it's time to make the next step. It's time to take the sleep test !