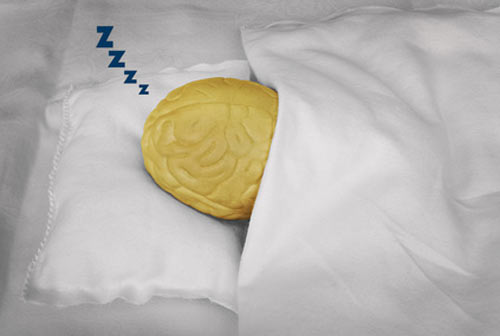 You have central sleep apnea when you stop breathing in sleep but you don't snore.

It means that your brain forgets to command your body to breathe.

In other words, central sleep apnea occurs when the airway is NOT blocked, but the brain fails to signal the muscles to breathe because there is an underlying problem with the nerves that control breathing.

What Happens When You Have Central Apnea? 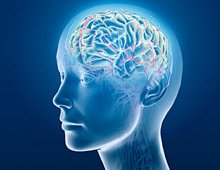 A person with central apnea has issues with the respiratory center from the brain. This center controls the chest muscles to make breathing movements.

When the respiratory center stops working during sleep, then your breathing stops, too. The brain does not respond to the changes of the respiratory gas levels from the blood (oxygen and carbon dioxide).

In central apnea, you stop breathing in sleep for a period of time (at least 10 seconds), but there is no effort to breathe at all, like in obstructive sleep apnea. Therefore snoring is not present in central apnea.

Typically, you will wake up several times at night, often with the sensation of gasping or choking during sleep. If these waking up episodes are frequent enough to cause disruption of your sleep, then you may feel very tired during daytime.

Tiredness during the day is only a small part of the problem. Read here what may happen if you don't treat central apnea soon.

The main cause of central apnea is unknown, but there are risk factors that can influence its development, such as:

Central apnea is often seen in people with panic about falling asleep.

They breathe quickly which results in low levels of carbon dioxide in the blood.

This is a problem. When they fall asleep, the breathing reflex fails to start, because of the low levels of carbon dioxide.

Disorders That Can Cause Central Apnea

Central apnea is most commonly seen in persons with neurological disorders that affect the control center of respiration, such as:

Central apnea can also occur in infants who are prematurely born. Such symptoms generally disappear in the first six months of age.

However, there is an increased risk for Sudden Infant Death Syndrome in infants who suffer from central apnea syndrome.

- Overwhelmed by too much information?
- Are you too tired to read further?
- I will try to help you. I only need an anonymous description of your problem.

To find if you have central apnea syndrome, you should take the polysomnography test. Here, the doctor will check how many apneic episodes you have in one night of sleep.

A multiple sleep latency test can be very useful, because it may demonstrate if you have excessive daytime sleepiness.

The symptoms of the central apnea are similar to OSA (except snoring) :

The snoring is less common in central apnea, but it may be a symptom of mixed sleep apnea.

The treatment for central apnea is based on:

Assisted ventilation devices, such as negative pressure ventilator, the cuirass respirator, are usually required if you have a severe central apnea syndrome. However, this ventilator may induce obstructive apnea episodes, so it should be used with caution.

If you have heart problems, such as cardiac failure, the treatment for your heart may greatly improve central apnea syndrome.

On the other hand, medicine therapy is a major advantage in the treatment of central apnea sleep disorder, but it requires much research in the field.

For some people with central sleep apnea, CPAP therapy may not work. A nasal CPAP can aggravate the condition of the disease.