How Can a Deviated Septum Cause Sleep Apnea? 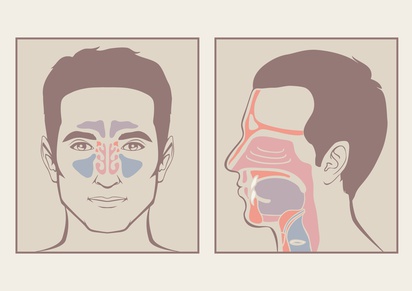 Deviated septum in one of the commonest types of nasal obstruction. The irregular shape of nasal septum may partially block the passage of air and interfere with breathing.

Depending on severity, a person with deviated nasal septum can develop obstructive sleep apnea.

To understand what is a nasal septum, and how to identify it, check the following short video. As you'll notice, if the shape of your nasal septum is not straight, but has an irregular shape, then you have a deviated nasal septum.

Nasal airflow is critical to good breathing, because anything that causes airway narrowing can lead to breathing problems. In the nose, for example, the nasal septum is often crooked from birth or as the result of blunt trauma during childhood or adulthood.

A patient with nasal obstruction will often open his mouth during sleep, and this reflex contributes to sleep breathing disorders, including snoring and sleep apnea.

Furthermore, nasal breathing has two unique characteristics that distinguish it from mouth breathing:

The air passing through the nose is slightly warmed and reaches the lungs at a temperature more comfortable for the body.

Using these sensors, the nose actively participates in controlling and managing respiration. Without these sensors, we couldn't understand properly how much air enters in our lungs.

Can a Deviated Septum Cause Sleep Apnea?

Because the patient opens his mouth during sleep (if he has nasal obstruction), this reflex will cause sleep apnea and snoring by narrowing the pharyngeal lumen (the space in the center of pharynx which allows the passage of food) in two ways:

If there is a narrowing somewhere in the upper airways (the main cause of sleep apnea), the pressure will lead, according to the Bernoulli principle, to a collapse at the point of narrowing, resulting in apneas during sleep.

This assumption gained further credence when it became clear that a misshapen nasal septum - a common cause of narrowed nasal airways - is extremely prevalent in sleep apnea syndrome patients.

Bottom line... Nasal obstruction doesn't directly cause sleep apnea, because the collapse of the airways does not occur in the nose. However, indirectly, there is a link between nasal septum deviation and sleep breathing disorders, including snoring and sleep apnea.

So, clearing the obstruction of the nasal passages, will help you improve breathing during sleep and even prevent the collapse of the airway (sleep apnea).

How to Fix a Deviated Septum

Now we started to understand how important is to have a healthy nose, without obstruction. In other words, fixing the deviated nasal septum or enlarged turbinates will help you improve breathing during sleep, and even sleep apnea and snoring.

Nasal obstruction may be treated by surgical procedures, including septoplasty to straighten a deviated septum, and turbinate reduction to remove or reduce large turbinates and polyps.

While these procedures may be performed independently as outpatient procedures, they are often used in combination with other procedures to treat sleep breathing disorders.

There are a lot of videos on internet about septoplasty, very descriptive and graphical. I didn't want to show you these of videos because some people may consider them brutal or not suitable. However, this doctor explains (only in words) about deviated septum surgery:

Septoplasty is not a terrible procedure. Recovery is usually quick and less painful than most any procedure. However, to know if nasal surgery will improve sleep disorders (snoring and sleep apnea), find an excellent, highly trusted ENT to help you make a decision.

Be prepared with the following questions to ask your doctors:

The following video explains about the journey through septoplasty and recovery:

After surgery, please try to have patience. Any healing process does involve time, and each time it varies based on how serious and lengthly your surgery was, how much they had to do to repair your nose (cartilage and the breaking of the nose as well as the estheics).

Remember to follow the doctors's recovery plan, and be very careful and gentle with your nose. It will take up to one year for a full fledged recovery to occur, just be thankful that they fixed it, and now with some patience, you'll get there.

If things get too painful, ask the doctor for some more painkillers, and most importantly, remember you have to nurture your nose and yourself.