Discover the link between pickwickian syndrome, obesity and sleep apnea

The Pickwickian Syndrome or obesity hypoventilation syndrome is a type of sleep apnea that is associated with extreme obesity.

If you are overweight, have problems in breathing, such as hypoventilation, and you have the symptoms of mild to severe obstructive sleep apnea, then you may have this syndrome.

What is Pickwickian Syndrome?

The Pickwickian is a type of sleep apnea that is associated with extreme obesity.

This syndrome is known for centuries. During the time of Alexander the Great, there was a leader called Dionysius of Heraclea, who had problems with extreme overweight.

He was so fat that he could not eat anymore. In fact, he is reported by historians to have been choked by his own fat.

Another example for antic history is Magas, the king of Cyrene, which was also obese and historians said that he was chocked himself to death.

The symptoms of pickwickian disorder were described by Dickens in The Posthumous Papers of the Pickwick Club, where a fat boy, Joe, was the person who had this disorder.

In this video you will see a rare and shocking example of this syndrome:


What Causes the Pickwickian Syndrome?

There are several factors that comes together to develop this syndrome, such as:

How obesity can cause Pickwickian?

Some people have a problem with the breathing reflex which allows carbon dioxide to accumulate in their blood. In this way the blood becomes toxic.

Obesity may cause shallow breathing by interfering with the work of the breathing muscle. And if the obese person is lying down or sleeping, this abnormal breathing becomes worse.

Side Effects of Pickwickian

Here are the most common side effects and complications that results from this breathing disorder: 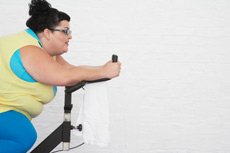 There are cases where CPAP is not able to eliminate sleep apnea and low blood oxygen level, so a temporary tracheostomy may be used.

If you want to know more about tracheostomy you can click here.

It is very important to know that weight loss is very effective in reducing the symptoms of this syndrome.

The more weight is lost, the more likely it is that the person's breathing will improve. Sleep apnea can be treated this way, but you should maintain your weight loss program after the treatment, or this disorder can return.

Weight loss surgery, or gastric bypass, is very effective in treating pickwickian syndrome, reducing sleep apnea to the lowest level. However, weight loss surgery is not a simple operation, and should be considered the last alternative in your treatment.