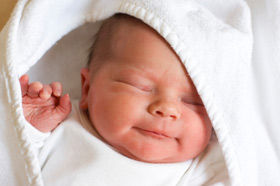 Sudden infant death syndrome (SIDS) is an unexplained and fatal syndrome that affects babies under 1 year of age.

SIDS is a mystery for doctors and scientists, because they don't know what are the causes responsible for the death of these infants.

Before learning how to prevent SIDS, you need to know what are the risk factors and the causes of this syndrome.

Smoking during pregnancy and SIDS

When you look at newborn babies, you will see that they often have pauses in breathing during sleep. These pauses are a normal respiratory behavior, because the lungs are trying to find their rhythm in the first months after birth.

The real problem appear when frequent apnea events are not normal.

Now you will probably ask yourself when an apnea event is abnormal in infants? The answer is not so simple.

When you see such a variation in breathing during the sleep of your infant, you will wonder how can you find an abnormal apnea?

Scientists believe that apnea events of more than 20 seconds during a baby sleep will be considered abnormal apnea. The child who shows this kind of apnea during first months of life need to be carefully watched by parents and doctors.

There are many preventive measures that can protect your baby from SIDS, according to this video:

Here are the most common ways to prevent SIDS: